For a country who love to complain, the British don’t do quite as well when it comes to claims – because of they are embarrassed to make insurance claims. A report commissioned by Direct Line recently discovered that British people suffer from awkwardness about claiming on their insurance which can put them at a distinct disadvantage when it comes to replacing lost or broken items they want, need and have already insured.

The study found that one in 20 people in the UK don’t want to admit to insurance companies that they even owned certain things in the first place, leading to them not making a claim when those things got broken or went missing. Likewise, we don’t always want to explain to an insurance company how they were broken or lost, because we’re worried about being judged. It makes sense to some extent. After all, we all love hearing stories about the funniest insurance claims people make, but should this really hold us back from making a claim ourselves?

Other reasons we don’t claim

Of course, it’s not just embarrassment that keeps us from claiming. There are 43 out of every one hundred people who don’t make a claim when they break or lose something, and of those, 37 simply can’t be bothered with the hassle of filling in forms and doing the admin, so decide not to. A further 20 don’t even realise that they can claim in the first place, and never even think about doing it.

The most common items we break or lose and don’t claim for are those expensive electronics we use every day, namely our phones and laptops, which go everywhere with us. Kitchenware is another category we seem to damage or lose regularly but don’t claim for on our insurance.

Among the reasons British survey responders gave for not making insurance claims were that they had damaged items themselves by being clumsy, had forgotten where they’d put things, or that they had fallen over with the items and broken them in the process.

The cost of awkwardness

Being embarrassed about making an insurance claim doesn’t come cheap, with people spending £130 on average to replace what they were too shy to claim for – much more than the cost of a phone call and a little time doing some paperwork.

Tips for speaking to insurance companies

If you do need to speak to an insurance company about a claim you feel a little awkward about, remember that whoever you speak to will have spoken to many other people already, often in the same day, and a lot of those people will have had smaller, stranger or more tenuous claims than yours. 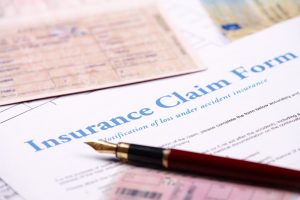 Don’t let your feelings get the better of you; stay matter of fact and remember that this is a business transaction so they just need your details and the facts of the claim. Don’t rant or be angry, but DO keep your wits about you because as friendly as the agent on the phone might be, they’re still part of the data collection process for your claim. If you’re really too embarrassed to make a claim, spend a little time reading about some of the more bizarre insurance you can get in other countries around the world, and then you might realise your claim isn’t so embarrassing after all.